How to Make A Stencil

A stencil is an impervious material such as plastic, cardboard, or metal with lettering, a design or a pattern cut out of it. The material is typically made into thin sheets. The thin sheets may be placed on just about any surface or product from wood crates, cardboard boxes and containers to walls, furniture, and decor. After placing the stencil on the surface, a substance such as ink or paint is applied over the design or lettering. The substance “seeps” into the cut out “holes.” Stencils are both the resulting design, lettering or pattern and the intermediate object.

The stenciling process can only handle one color of pigment at a time. This means, multicolored designs must be stenciled several times, allowing for drying after each process.

Simple letters and numbers can be punched out on a stencil machine. For custom graphics, custom fonts, and large letters and numbers, images must be converted by software. This allows the images to be interpreted on a plotter in order to cut the stencil.

Because of the nature of stencils, certain images and letters generate islands, which are sections of material that are inside of the cut out holes. To avoid islands, the stencil must contain "bridges" to allow for the middles of letters such as A, a, B, b, D, d, O, o, P, p, Q, q, or R. 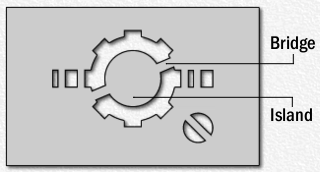 #2 Stencil is cut on a material of choice

Material options run the gamut from acetate, Mylar and vinyl to paper, cardboard, plastic, wood and metal. Depending on the material, the stencil may be reused repeatedly in order to rapidly produce the same letters or design. Opting for a reusable stencil is also a great way to save money. It is important to note that in order to be reusable, the stencil must remain intact after a design is produced and the stencil has been removed from the work surface.

Spray paint is the most common industrial application for stenciling. However, other substances can be used such as ink, paint or pigment powder. Whichever substance you decide to use, proper stencil application technique is critical, as soft edges can appear when the stencil is too far away from the surface underneath.

For a really crisp line, adhesive stencils can be made. Unfortunately, this type of stencil has a short life span. They are single use.