Aerospace Packaging for the Next Gen Space Race

With Virgin Galactic, Blue Origin and SpaceX pushing to dominate the new frontier of space travel it would seem that we're amidst a modern day “Space Race!” Now, instead of two countries competing to explore space, we have three of the world's leading entrepreneurs going head-to-head to be the first to develop technology that will safely transport a human to mars and back.

Opposed to the 1957-1975 Space Race between the US and the USSR the current race boasts a different goal. Instead, Sir Richard Branson of Virgin Galactic, Jeff Bezos of Blue Origin, and Elon Musk of SpaceX are focusing on getting humans to mars. “It’s not to get the first human to the moon or back. We want to be part of a society moving to space” said Jeff Manber, CEO of the space company Nanoracks.

Most notably is that instead of trained Astronauts in space its consumers in space. These new ideas about space exploration create big opportunities for the thousands of manufacturers, organizations, and agencies that support space exploration technologies.

SpaceX  designs, manufactures and launches advanced rockets and spacecraft and aims to "revolutionize space technology, with the ultimate goal of enabling people to live on other planets." Watch the successful launch and landing on SpaceX's website or on their Youtube channel.

When SpaceX successfully launched and landed their rocket they simultaneously released 11 ORBCOMM satellites into orbit during the spaceflight. ORBCOMM Inc. is a leading global provider of Machine-to-Machine (M2M) communication solutions. When companies like this take advantage of the new technology created by the latest Space Race the economy experiences a ripple effect. Sub-contractors, vendors and manufacturers are put to work creating new and unique products that need to arrive at SpaceX.

Aerospace packaging will play a huge role in supporting these companies who produce and deliver critical parts around the world. The industry offers it own set of unique aerospace packaging and handling challenges that require new ideas for Aerospace product packaging.

Blue Origin is developing technologies to enable private human access to space with the goal of dramatically lower cost and increased reliability. After SpaceX successfully landed their rocket the two founders got into a much publicized twitter debate about the differences between "orbital" and "suborbital" flights.

For Virgin Galactic, the race is not just about space travel. The company wants to advance and dominate satellite service. Again, creating manufacturing jobs in the economy. All of this new space-age technology is driving manufacturing, in California alone its easy to see the ripple effect. 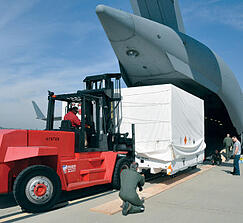 Jet Propulsion Laboratory (JPL) is a research and development center and NASA field center. This location builds and tests equipment that one day will be launched into space.